THE SUBTLE AFFINITY BETWEEN CHOCOLATE AND OLIVE OIL
WHO WE ARE
VISIT US
Language:
Language:

The creation of a new confectionery in such a prestigious context as the celebration of the 2600 years of Marseille was not a simple matter. For the occasion, the emphasis could have been on the festive aspect of a one-off event. Yet deeply enamored with Marseille and its history, Francesco Martorana set off on a quest to comprehensively determine and encompass all of the parameters of a legendary city and its people into a emblematic composition that the inhabitants of Marseille would immediately identify with.

And so it was, that, as a Mediterranean through-and-through, passionate about Greek mythology, keen on the exclusive use of olive oil for cooking and a lover of fine chocolates he began to highlight and inventorise the philosophical, historical, economical and gastronomical traits of Marseille proper. What followed was an intense period of research and sampling where the gamut of Mediterranean flavours was carefully screened.

It soon became obvious that almonds and olive oil would be the main ingredients of the magic formula that was to become l'Espérantine de Marseille.

A few weeks of further efforts were necessary to devise the final and current taste: a subtle marriage of a minimum of 70% cacao dark chocolate and sweet almonds, further associated to strong mint and candied orange-peel.

At the heart of this unctuous blend, extra virgin olive oil adds a delicate and rather noble note which lingers enchantingly on the palate. 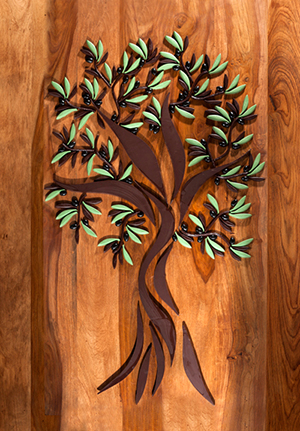 L'Espérantine, the Mediterranean diet as a source of inspiration

Once again, historical realities provided the necessary inspiration: l' Espérantine 'blossomed' from the Mediterranean's most emblematic tree, the olive tree. Indeed, is it not written in Greek mythology that "the fruits of the olive tree radiate gold and its leaves, poetry"? Accordingly, l'Espérantine was modeled upon an olive leaf and given a tri-dimensional existence through the use of software.

Thus conceived and designed, l' Espérantine is the perfect union between taste and symbolism with its collection of coffrets inspired to Athena, author of the olive tree, and through the olive branch as a universal symbol of peace and hope.

With the 'laboratory' phase of creation concluded, the following step was consultation: popular verdict was essential. Dressed in Athena and Massalia display packs, l'Espérantine de Marseille® greatly captured the hearts of those who tasted it.

The success was immediate and the praise of the inhabitants of Marseille buoyed the team, who had been anxiously awaiting their impressions. The next logical step was to submit l'Espérantine to the verdict of a jury of professionals at the INTERSTUC, the international confectionery tradeshow held in Paris in February 2000.

The old saying according to which "anything which is good for Marseille is good for the rest of the world" was magically verified as l'Espérantine de Marseille, in a magnificent "Olive-branch with Espérantine leaves" casket was awarded the coveted Cordon Bleu prize for best confectionery.

Thus entitled, l'Espérantine's primary vocation was confirmed: to deliver to all, in the name of the inhabitants of Marseille, a gourmet message of peace and hope. 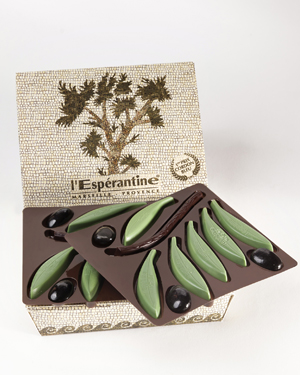 We use cookies to improve our services and provide your with the best experience possible. By continuing your navigation, you accept their use.

There are no more items in your cart